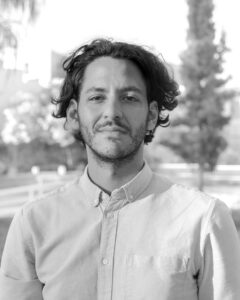 As Ecogenia’s first Program Development Manager, I’m excited about the possibilities the program can bring to my hometown, Chania, and Greece as a whole. As I embark on this journey, I can’t help but reflect on how I got here.

Growing up in a rural area on the island of Crete was pretty amazing. The beach, the mountains, the freedom that surrounds you. Rural communities in Crete are built around family – oikogeneia in Greek – and are extremely youth-centered. We grow up being extremely proud of our Cretan heritage and we are known for our hospitality.

Things went largely unchanged for a long time, but the early 2000s was a pivotal decade that changed and reshaped the lives of Greeks all over the country, forever. Those were years of great joy and prosperity for Greeks all over the world. We had just joined the Eurozone, we were about to host the 2004 Olympic Games for the second time since their modern re-conception, and capital was pouring into every Greek household like never before. I was lucky enough to grow up during these times, I got a taste of both, the simplicity of growing up in the 90s and of seeing first hand the westernization of Greece, and more specifically Crete.

Despite being extremely happy in Crete, I felt there was always something missing. I wanted to travel and see what was out there. So in 2005, at the age of 18, I was extremely fortunate to have the support of my family when I decided that it was in my best interest to go do my university studies abroad. First, in the UK for a short year, and then in the USA for my Bachelor’s degree. Although the cultural shock was tremendous and the way of life from rural Crete to the USA was – and still is – unimaginably different, I was happy to explore and learn from a different culture.

What I didn’t know was that the greatest economic crisis in modern history would soon hit and find me away from home. That crisis, which today is known as the Great Recession of 2008, started in the US with the housing bubble and created a ripple effect throughout the world. Economies crumbled and Greece was no exception; a volatile system based on debt was no match for the crisis that even the US succumbed to.

Despite the hardships that followed, I managed to earn my BA in Economics and I finally returned to Greece in 2013. What I found there upon my return was profoundly disturbing, infuriating, and sad at the same time. A broken society, with lost values and a sense of introversion. People were not smiling anymore, and the country had fallen into a deep circle of isolation and the rise of populist movements. Furthermore, the social effects of the crisis were catastrophic. The government’s countermeasures resulted in an increase in unemployment, severe brain drain, poverty, and social exclusion, especially among the younger generations. A recession that turned into a depression.

When you are young, you are filled with ambition and optimism – so was I. In the face of all these hardships, I finished my military service and managed to get my Master’s Degree in Entrepreneurship at the ALBA School of Business in Athens. In the meantime, I was working many different jobs to support myself and my studies, but there was still something missing. I missed the good old days of freedom in my hometown of Chania. I missed the beach, the mountains, but most importantly I had forgotten the values and the simplicity of working to live instead of living for working, which had sadly become the reality for my generation.  This climate led me to the decision to move back to Chania to work for the family business.

In 2018, things started getting better after a decade of economic turmoil. There was a sense of optimism flowing around which was highlighted by the success of the summer of 2019 that proved a record year for Greece’s main industry, tourism. Tourists flocked the islands and the sense of optimism was becoming real. The summer season ended and as the winter approached, my family and I, as many small business owners do, were deciding how to expand the family business. The timing was perfect, the economy was recovering and Greece was on the right track.

What we didn’t know was that the greatest pandemic since the 1918 Spanish Flu was about to hit not just Greece, but the whole world. See a pattern here? This time there was a collective crisis. It didn’t matter if you were in the US, Europe, or the most remote corner of the world, we were all affected.

On a personal level, one year of inactivity of the family business put a tombstone not only on expanding it but in the viability of the business itself. I decided it was time to act. Applying to jobs became my full-time occupation, with quarantine making it easy to just be in front of the computer all day. Until one day, right before the point of disappointment, I saw a social media post from a very dear friend about a Greek-American young woman looking for partners in Greece to implement an idea that would promote sustainable development in Greece. This is when I met Lia Papazoglou, who introduced me to the idea of Ecogenia, a young nonprofit in Greece that aspires to harness the appetite of young Greeks to address the challenges we faced when we entered the job market, all the while strengthening the third sector in the country through a paid service model.

And like that, I found purpose, not only because a job opportunity was presenting itself, but most importantly because this was an opportunity for me to play a role in giving back and rebuilding our society. Ecogenia puts people first and foremost and is powered by the vision to ignite a generation by embracing sustainability and teaching the youth how to work collectively for the betterment of our society as a whole.

As I worked with the founding team of Ecogenia, we began to make plans for a pilot program to test our theory of change. Naturally, I thought my hometown of Chania would be a great fit. You can say I’m biased, which is true, but the city has ambitious climate goals, a progressive attitude, and is ripe for opportunity. The city is a cultural center, it has plans to become a Green City that puts its people first and become sustainable, its businesses are realizing the value of sustainable development and with Ecogenia’s help, we can make Chania a hub of sustainability not only for Greece but the Mediterranean as a whole. Ecogenia was indeed the missing link that brought purpose into my life and my work.

As Ecogenia’s first Program Development Manager, I’m hoping to create pilot programs throughout the country and scale the program nationally. I’m hoping to be able to contribute to a more sustainable-minded workforce and help the younger generations find their missing link, just like I did.

Ecogenia is the first NGO in Greece that promotes sustainability through civic engagement, training and employment opportunities for young people. Through a service year model, Ecogenia connects Greek youth with organisations dedicated to creating sustainable solutions to environmental and societal challenges.

The Mountain Path to Ecotourism

This website uses cookies to improve your experience while you navigate through the website. Out of these, the cookies that are categorized as necessary are stored on your browser as they are essential for the working of basic functionalities of the website. We also use third-party cookies that help us analyze and understand how you use this website. These cookies will be stored in your browser only with your consent. You also have the option to opt-out of these cookies. But opting out of some of these cookies may affect your browsing experience.
Necessary Always Enabled
Necessary cookies are absolutely essential for the website to function properly. These cookies ensure basic functionalities and security features of the website, anonymously.
Functional
Functional cookies help to perform certain functionalities like sharing the content of the website on social media platforms, collect feedbacks, and other third-party features.
Performance
Performance cookies are used to understand and analyze the key performance indexes of the website which helps in delivering a better user experience for the visitors.
Analytics
Analytical cookies are used to understand how visitors interact with the website. These cookies help provide information on metrics the number of visitors, bounce rate, traffic source, etc.
Others
Other uncategorized cookies are those that are being analyzed and have not been classified into a category as yet.
SAVE & ACCEPT